Wegmans No Longer Requiring Masks for Customers
Wegmans joins fellow retail chains Target and Walmart to not require masks for customers from now on as new rules took effect in New York State following the CDC guidance indicating those who are fully-vaccinated can forgo masks in most cases. The company is currently developing final policies for employees to follow. The decision on whether masks are required is now up to local stores and business. Some this morning immediately ditched the mask mandate, but not all have. You might to pay extra close attention when entering a business to see the specific instructions for that locale.

Savona Man Arrested for Sex Abuse of Minors
A 38-year-old Savona man faces felony charges of sex abuse and criminal sex acts after being indicted on sex charges related to abuse of several minors over a period of time. The Steuben County Sheriff’s office reports that Makitra had sexual contact with two children under the age of 11 and another under the age of 16. Following his arraignment, he was released to appear in local court at a later date.

Broome County Teenager Missing
New York State Police are asking for help locating a missing Broome county teenager, who may have run away. Troopers say 15-year-old Adrianna Leidecker was last seen at a home on Hyde Street in Whitney Point. It's believed she left the home around 1 A.M. on Sunday, May 16th. Adrianna is described as a five feet, eight inch tall white female, with blonde hair and blue eyes and weighs 149 pounds.  Adrianna has run away several times in the past, and had previously been located in Dryden, in neighboring Tompkins County, or Pennsylvania.  Anyone with information is asked to contact NYSP at 607-775-1241. 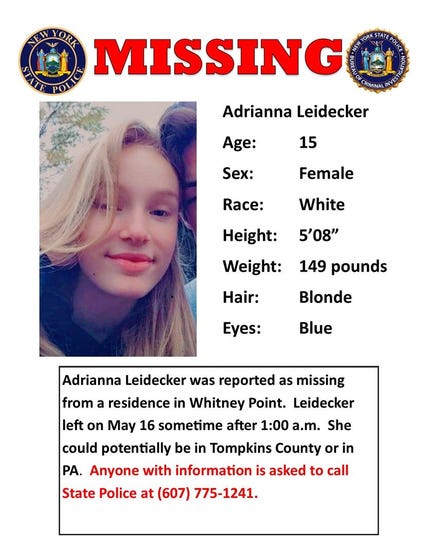 NYS Releases Updated COVID Guidelines for Camps  & Childcare
Today, New York State has released updated COVID-19 guidance for childcare, day camp and overnight camp programs. Now, programs and facilities must collect COVID-19 vaccination status and documentation for all staff and children, as well as implement mandatory daily health screening for staff and visitors which includes daily temperature checks. State and local health departments must also be notified “immediately upon being informed of any positive COVID-19 test results” by a staff member or child. Each site must also implement “property-specific” capacity limits for children and campus “that ensures appropriate social distancing”. Unvaccinated staff or staff not fully-vaccinated must maintain at least a six-foot distance from other unvaccinated staff. All those over the age of two, as well as staff not fully vaccinated, must wear face masks except when eating, drinking, showering, swimming or sleeping and resting. Full guidance can be found by clicking here.

Trump Organization Under Criminal Investigation by State AG
One of the investigations into former President Trump's company has taken a turn. For the better part of a year the New York Attorney General's office has been investigating whether former President Trump and the Trump Organization improperly inflated the value of his assets to secure loans and tax benefits. The office has informed the company that investigation is now looking at more than civil violations. A spokesman said "We are now actively investigating the Trump Organization in a criminal capacity." No comment from the company. Any charges would still be prosecuted by the Manhattan District Attorney's office, which took possession of Trump's tax returns after a long legal fight.

10 Million+ New Yorkers Receive At Least One Dose of COVID Vaccine
Governor Andrew Cuomo has announced more than 10 million New Yorkers have received at least one dose of the COVID-19 vaccine. 118,879 doses have been administered across the state's vast distribution network in the last 24 hours, and 806,782 doses have been administered statewide over the past seven days.