Cuomo Announces “Major Reopening” of NY May 19th
Today, Governor Cuomo announced a major reopening of New York as the state’s COVID numbers are at their lowest rates since October and a vaccine is now available. In about two weeks, New York, along with Connecticut and New Jersey, will end capacity restrictions in the tri-state area Wednesday May 19th. Despite lifted restrictions, the state will still abide by CDC guidelines on six feet of physical distancing, which could still restrict the capacity for some businesses. The new distance-based maximum capacity will apply across commercial settings, including retail, food services, gyms and fitness centers, amusement and family entertainment, hair salons, barber shops and other personal care services, among other settings. It will also apply in houses of worship. 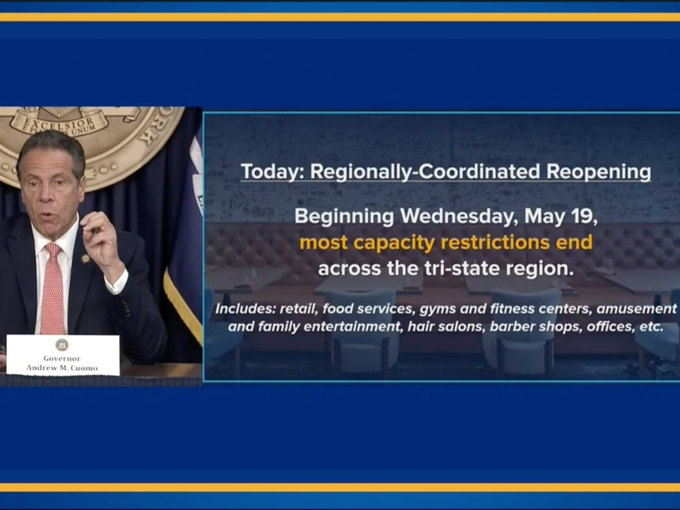 16 More COVID Cases Reported in Steuben
The Steuben County Public Health Department received notification that 16 more residents have tested positive for COVID-19. This brings the total to 6,551 confirmed cases, 176 of which are currently active. Public Health Director Darlene Smith says none of the latest cases received even one dose of a vaccine and that is often, but not always, the status of the new positives she has seen over the last couple months.

Steuben County Legislator Kelly Fitzpatrick jumped into lake Salubria Friday evening. WVIN was there, first responders and some witnesses. The jump was intentional, the cause valid. The Bath-area county representative was the 2021 jumper for the Tyrtle Beach campaign, an annual grass roots fundraising campaign that is organized by Steuben Youth Services Fund, Inc. to support youth programs in the Central Steuben County. Fitzpatrick admits…she’s not a fan of the water (tryle1). The event, launched in 1992, has raised more than $742,000. Make your donation online by the end of the month at www.tyrtlebeach.com

Michigan Woman Arrested in Corning
A Michigan woman is facing a series of charge after he was pulled over in the Town of Corning. State Troopers arrested 25-year-old Quanetta Waters. She was charged with three felony counts of possession ammo clips, two felonies of possessing loaded firearms, criminal possession of a controlled substance and aggravated unlicensed operation. Court action is pending.

SeaBreeze Reopens May 22nd
Seabreeze Amusement Park plans to reopen later this month. Making the announcement on Facebook, the park plans to open May 22. Masks are required at all times while in the park, and guests must purchase tickets in advance.

Schumer Holds Afternoon Press Event Today in Dundee
Seeking to put a cork on problems facing New York’s wine industry, U.S. Senate Majority Leader Charles Schumer will reveal that decisions by the U.S. Department of Agriculture (USDA) to stop collecting data on grape production vineyards in New York puts the Rochester-Finger Lakes region, the state’s grape and wine industries, and local economy, at risk. He’ll hold a press event this afternoon at 2 p.m. in Dundee. Schumer will say that the Rochester-Finger Lakes is currently a major producer of wine in the U.S., but these decisions by the feds to halt data collection could derail what keeps New York’s industry competitive with California, Washington State, and the world.

Statewide COVID Rate Drops to New Low Since October
New York’s statewide COVID positivity rate has dropped to 1.49%, the lowest since October 28th. The governor says the numbers are trending in the right direction. The Southern Tier Region reports 64 COVID-related hospitalizations. Sixty-six people in the region are in intensive care.