Health Director Smith Says NY’s Hub Plan Delays Vaccinations
Though both Moderna and Pfizer COVID-19 vaccines are available, Steuben County Public Health Director Darlene Smith says the Steuben Health Department has received very little of the vaccine and the limited supply is not meeting the urgent demand. Smith placed an order Christmas Eve for 4,000 doses but has only received 200 doses so far. All 200 doses of the vaccine were administered in just under 3 hours in a Saturday closed-clinic targeting the 3 main priority groups in the 1B designations: those working in schools, law enforcement and fire departments. The pre-registration forms online were filled out for all 200 people within seven minutes. Steuben’s Health Department Director also finds at fault the state’s chosen vaccine planning process using regional hubs instead of consulting with county health departments. Smith also says this process adds an unnecessary layer of bureaucracy which has created confusion, delays and a more complicated process.
Hear the full interview at: https://wvinbath.com/assets/podcaster/215/2021_01_19_215_99368_4795.mp3?

Tops Launches Storewide “Check Out Hunger” Campaign Saturday
Tops Friendly Markets launches the annual Check Out Hunger Campaign to benefit food banks across New York, Pennsylvania and Vermont. Nine food banks,  including the Food Bank of the Southern Tier, are participating and this year’s campaign kicks off with a $25,000 donation by an anonymous couple from Williamsville. Tops has matched this donation. Beginning this Sunday, January 24th to Saturday, February 13th, you can donate at your local Tops by making a donation of $2, $3 or $5 through the cashier to help provide food to your local food bank. Since Checkout Hunger started in 2006, Tops has raised over $4.5 million for local food banks.

AMBER Alert Issued for 2 Abducted Greece Children
The New York State Police Special Victims Unit has activated an AMBER Alert on behalf of the Town of Greece Police Department. Two children living in a foster home were taken under circumstances that lead police to believe they are in imminent danger of serious bodily harm and/or death. The two children are age 5 and under and are of African-American ethnicity. Shekeria Cash is a 3 year old, 40 pound 3 foot tall girl with braids last seen wearing panda pajamas. Her 5-year-old brother Dimitri Cash Junior is 4 feet tall and 50 pounds, last seen wearing fire truck or dinosaur pajamas. If you have any information about these children’s whereabouts, please contact GREECE PD at 585-428-6666. 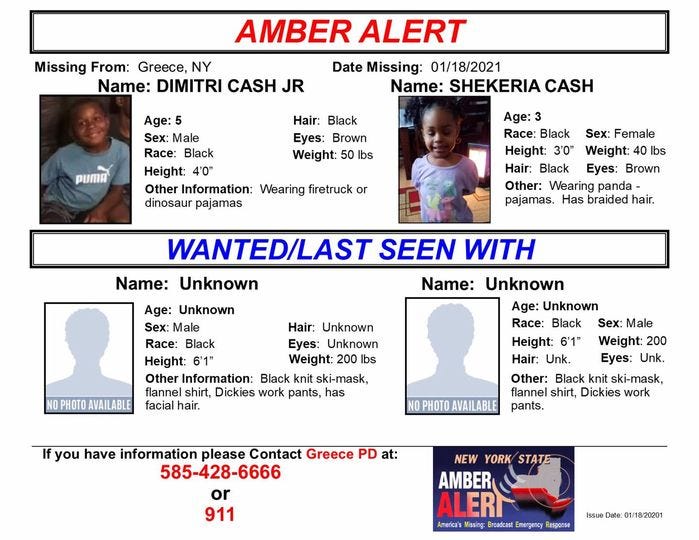 Corning Meals on Wheels Awarded $5,000 from Siemens Energy
A nonprofit organization in Steuben County have received thousands of dollars in donations from Siemen’s Energy, formerly Dresser-Rand. It was part of the company’s Positive Energy campaign. Agencies produced a one-minute video and communities supported the movement by ‘liking’ the videos. Corning Meals on Wheel on Monday was awarded $5,000. Here’s a clip from the video. A total of 122 charities were ultimately selected to receive donations ranging from $500 to $10,000 based on a combination of public "likes" and scores earned from a panel of judges.

State Gas Prices Rise 7 Cents from Last Week
Gas prices are sneaking up…today’s national average price for a gallon of gasoline is $2.39, up seven cents from last week. The New York State average is $2.47 – up eight cents from last week. Crude prices have been fluctuating and remain over $50 per barrel. Prices rose over market optimism that coronavirus vaccines will help crude demand recover this year.

Bath Minor Charged with Assault
A 13-year-old girl from Bath has found herself in trouble with the law. The early teen is charged with assault and child endangerment. Administrative action is pending.

NYSP Arrest Corning Man for Weapon Possession
State Troopers arrested 24-year-old Donald Burdick-Mattison of Corning. He is a convicted felon and was charged with criminal possession of a weapon. He’ll appear in Town of Hornby court.

Guthrie Announces All Vaccines Distrubuted
Guthrie has distributed all of their COVID-19 vaccines in New York and nearly all in Pennsylvania. In a press conference with Governor Cuomo, hospital officials said that 54.9% of hospital workers were vaccinated at Guthrie Cortland Medical Center as of Jan. 17. Corning Hospital reported that 75.2% of hospital workers were vaccinated as of Jan. 17. As of today, Guthrie has vaccinated roughly 6,000 people.