Candidates for the 2020 Steuben County Hall of Fame were confirmed this morning by the county Legislature. Since 1976, nearly 460 people have been nominated with 149 individuals inducted into Steuben Hall of Fame. Due to restrictions on social gatherings due to the COVID-19 pandemic, a reception for this year's inductees will be held at a later date.

A weekend fire in Big Flats claimed the life of a man. The home on West Hill Road was completely destroyed. Two family dogs were also killed. Other occupants in the home were able to escaped. Ten fire departments responded. The cause of the blaze remains under investigation.

The Steuben County Legislature officially requested today the current state of emergency imposed by New York State be lifted, giving county officials the ability to set suitable guidelines for local operations.
Some legislators cited concerns about the recent spike in COVID-19 cases in the county. The request will be forwarded to the state Governor and Legislature. County lawmakers also approved:
· Awarding a total of $6.1 million to low bidders for the Phase II Court and County Offices
Renovation Project. Vendors include general construction, electrical, plumbing, mechanical and controls.
Phase II work includes significant renovations to the County Office Building, and county court complex
in keeping with mandated state court reform. The Phase II work may begin as early as next week with
completion set for 2023, according to county Manager Jack Wheeler.
· Setting 10 am, Nov. 12 for the formal presentation of the 2021 county budget. Work on the budget
is already under way, with the first legislative workshop set to follow the Finance
Committee regular 10 am meeting Oct. 13th.

Local employment appears to be rising after a an economically chaotic spring. Steuben County's jobless rate fell to 9 percent in August as the number of county residents on the unemployment rolls decreased by 1,800 from the previous month of July when the rate was 11.7 percent. These numbers are according to the New York State Department of Labor.

Steuben County residents lined up at the Victory Highway Wesleyan Church in Painted Post Saturday for the second and final day of drive-through COVID-19 testing sponsored by the county Public Health Department through the New York State Department of Health. The event  also drew staff from other county services such as Buildings and Grounds, Public Works and the Office of Emergency Services as well as the VA in Bath.

The Steuben County Board of Elections announced important deadlines for the upcoming General Election on November 3rd. Dates include:
· October 9th – Last day to apply in person or postmark a voter registration form for the November 3rd
Election.
· October 14th – All voter registration forms must be received by Oct.14.
· October 27th- Deadline to apply for an absentee ballot.
· November 2nd – Last day to apply in person for an absentee ballot
· Novemebr 3rd – Last day to deliver a general election absentee ballot in person to the County
Board of Election, any Steuben County poll site or in the Absentee ballot Drop Box
located in the entry way of the County Office Building.
The commissioners also announced the final, complete list of polling site changes. All other poll site will
remain where they have been during previous elections.
For a complete list of polling sites, go to https://www.steubencony.org/Pages.asp?PGID=19
For the Steuben County Poll Locator, go to https://www.steubencony.org/Elect-Polling-
Places/Poll_lookup.aspx
For more information, call (607) 664-2240 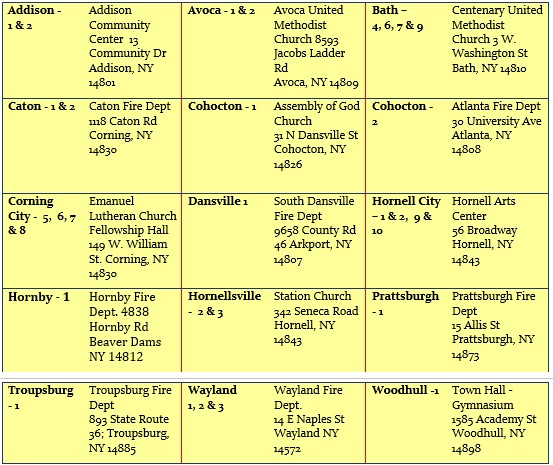