Ten New COVID Cases Reported in Steuben
Yesterday afternoon, ten new positive cases of COVID-19 were reported by Steuben County Health officials. The local health department is now dealing with 25 active cases. Four people from the City of Corning were infected, two from Campbell and one each from Freemont, Jasper and the villages of Hammondsport and Savona. Four individuals are residents of Corning Center and two individuals are staff members of Corning Center. Steuben County Public health Director Darlene Smith said it is clear that COVID-19 has reached the level of community spread in Steuben. She added that Steuben has not seen this number of cases in one month since April.

Truck Rolls Over on County Route 10
A County Route 10 accident Saturday evening resulted in only minor injuries reported. Just below the Windfall Road on the Town of Bath on County Route 10, a pickup truck rolled over. The Bath Fire Chief arrived and reported a male occupant was inside the vehicle, but was able to crawl out. EMS evaluated the driver on-scene and he was treated for minor injuries. 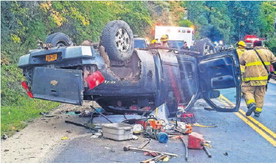 DEC Announces Small Game Hunting Seasons
Department of Environmental Conservation (DEC) announces several small game hunting seasons open October 1st across the state, including special youth hunts and new hunting opportunities for active duty military members and veterans. Several special youth-only hunting seasons for pheasants and waterfowl occur prior to the start of the regular season. You can find Season dates, bag limits, and other hunting regulations for New York’s small game species listed under the Hunting and Trapping Regulations Guide, which can be obtained from a license-issuing agent or on DEC’s website.

Officials Form Commission to Investigate COVID Nursing Home Deaths
Despite holding hearings on New York’s COVID-19 nursing home crisis, state officials have yet to pin-down exactly how many have died in nursing homes because of the virus. A group of lawmakers from both sides of the political aisle announced they will work to form an independent commission to investigate with the goal get answers from the state’s Department of Health. Last week, an online petition was announced to build public support for the commission. The idea received both Democratic and Republican support in the state assembly.

State Settlement Sparks Absentee Ballot Reform
A new settlement between New York State officials and the League of Women Voters could prevent absentee ballots from being rejected in the state and expands correction options for absentee voting. The agreement establishes a process to ensure that voters’ ballots will not be rejected without their knowledge and give them the ability to fix the error. Voters will be contacted in the event there is a technical issue with their ballot, or if it’s rejected in general. Over 84,000 ballots in New York City alone were rejected in the June primary elections.