Big Bobcat Photographed Near Hornell Plaza
Hornell made headlines for one big bobcat after the large feline was spotted earlier this week near the Hornell Plaza and photographed by Subway employee Taylor Pygott in the plaza from the restaurant’s drive-thru window as the large cat passed the edge of the property line of the busy plaza’s parking lot. 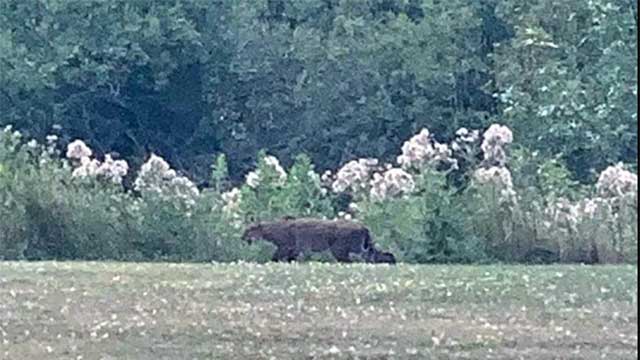 DOT Announces Closures This Week on State Route 70
The State Department of Transportation advises motorists of daytime lane closures in place this week along State Route 70 as they resurface over six miles of pavement between Route 36 in Steuben County. Construction will be made to improve rideability of the pavement along Route 70 and will occur in two phases with the first phase having already begun and anticipated to be complete in about one week. The construction’s second phase will be a single-course overlay and expected to last about a week in early October. Two-way traffic will be maintained using alternating single-lane closures and on-site flagging personnel during construction. Drivers could experience delays and advised to seek alternate routes. No detours will be posted.

Bath Central & Local Schools Hold Reopening Meetings for Parents
Many local school districts including Corning- Painted Post School District and Bath Central School District are holding virtual and in-person meetings to finalize and give parents a briefing on what their school reopening under the new normal will look like in the fall. Other schools in our region will be holding informational meetings for parents and students as the fall semester gets closer.

Steuben Public Health Releases Gym Re-opening Details
New York State has approved gyms to reopen beginning next week on Monday, August 24th.  To reopen, gyms and fitness centers must be in compliance with all of the guidelines, complete the attestation form on the NY Forward site, and undergo an inspection performed by the Steuben County Public Health Department within two weeks of their reopening. Gyms must adhere to all of the guidelines, including those around masking, social distancing, sanitation, capacity, air filtration and signage in order to pass inspection.

Specific guidance for gyms and fitness centers can be found by visiting the State’s NY Forward website at https://forward.ny.gov/phase-four-industries.

To schedule an inspection, gyms and fitness centers must email their safety plan to opengym@steubencountyny.gov.

State Police Confirm Identity of Body from Almond Fire
State Police officially confirmed the identity of a body found last Thursday in a house fire on Main Street in the village of Almond. Fire crews from Steuben and Allegany County battled the blaze. Trooper James O’Callaghan is the State Police Public Information Officer for the area and says the victim has been identified as 58-year-old Nancy Lee Mallory. O’Callaghan also said state fire investigators still have not released a final report on the cause and origin.

Law Enforcement Launches STOP-DWI Campaign
Law enforcement agencies statewide will be ramping up patrols to prevent impaired driving as the annual campaign begins today and continues through Labor Day, Monday, September 7. The STOP-DWI’s Drive Sober or Get Pulled Over campaign is designed to reduce alcohol and other drug-related traffic crashes. Law enforcement will be stepping up patrols, and the NYS Thruway Authority and State Department of Transportation will have Variable Message Signs alerting motorists to the consequences of impaired driving to help deter this dangerous behavior.