Sweet Wins Mayoral Nomination at Bath Village Republican Caucus
The Village of Bath Republican caucus was held last night and close to 200 people turned out to vote. Voters nominated Mike Sweet for Mayor, 111 to 64 over incumbent Bill Von Hagn. Karen Causer and Jeff Muller were the top two of four nominees for Village Trustee, defeating Joe Washburn and Dan Chapman. Village Justice was named Bob Plaskov. Mayor Von Hagn said he was happy to see the community get involved, proud of his 25 years in community service and happy to be able to spend more time with his friends and family.
(AUDIO: Sweet Talks Taxes and Plans as Mayor)

State Senate Candidate Danks-Burke Stops in Bath
Democratic candidate for New York’s 58th Senate District, Leslie Danks-Burke, held her 6-city Whistlestop Tour yesterday and stopped in Bath and Hornell. Danks-Burke says that we New Yorkers pay the highest taxes in the nation and are not seeing the benefits of the high rate. Danks-Burke promised she will bring more jobs to the district, if elected. She is running against Republican incumbent State Senator Tom O’Mara in November. 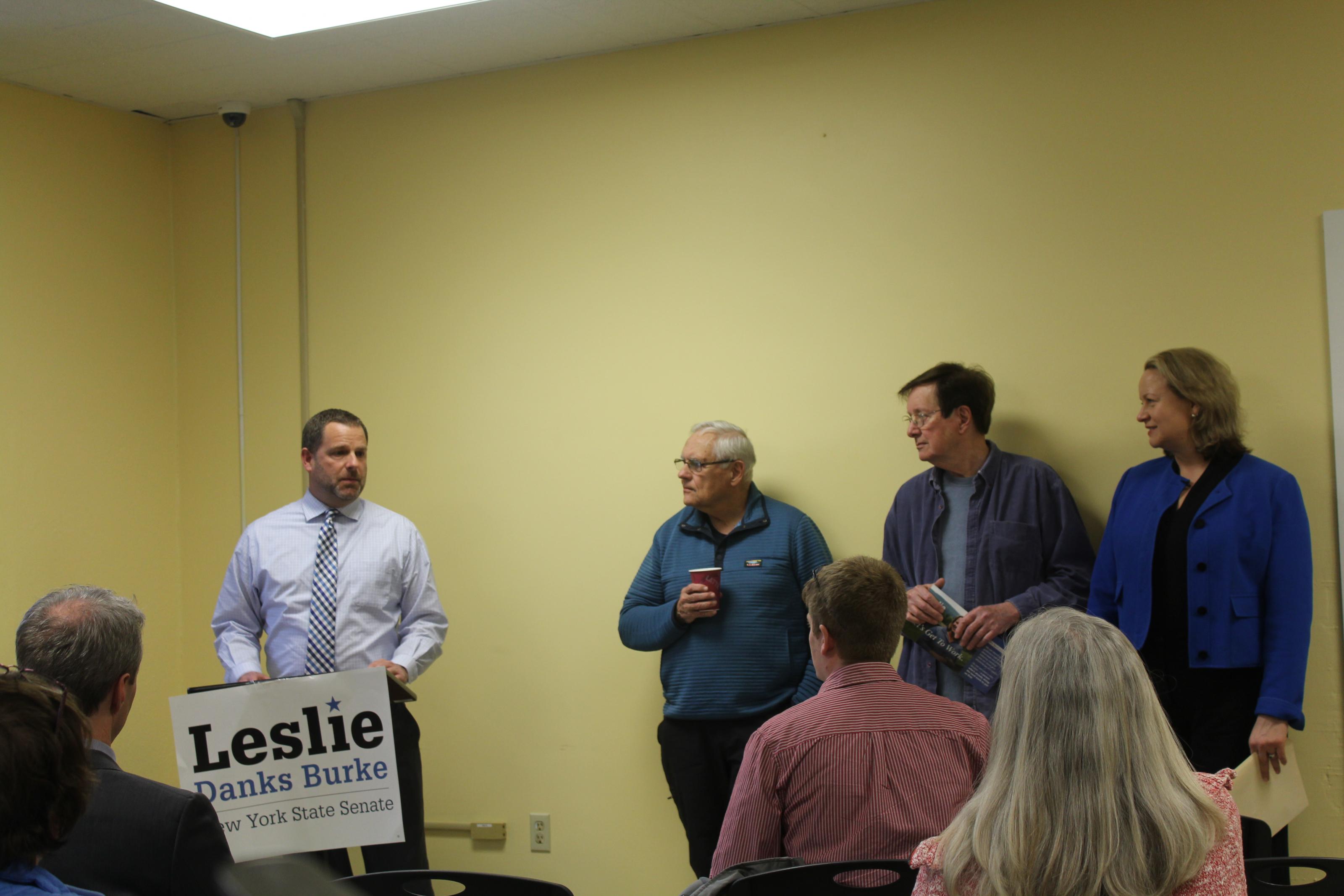 County Legislature Approves Housing & Broadband Studies
This week’s County Legislative Meeting on Monday resulted in the approval of a housing study. Also achieved this week was the authorization of a four-county wide broadband study with Schuyler, Yates and Tioga counties as part of Steuben’s plan for shared services this year. Funds were also transferred from various county Board of Elections accounts to the voting machine capital account. The Legislature also accepted funds from United Way for increased training of providers, staff, parents and the community while providing materials like lead-free paint to reduce lead poisoning and exposure. The Legislature also supported an increase in funds statewide for Cornell Cooperative Extension.

County Legislature Presents Shared Service Plan
Earlier this week, the Steuben County Legislature presented its shared services plan to the public. The 3-year plan will continue sharing services between several departments across the county. Steuben County Manager Jack Wheeler says the major highlights from the plan are sharing personnel, equipment and code enforcement officers, and working to accomplish quality, rural broadband. Wheeler says the plan is intended to save county taxpayers money and projects an estimated $1.2 million in savings. The plan can be reviewed here.

State Labor Department Releases Annual Area Unemployment Rates
Yesterday, the New York State Department of Labor released preliminary unemployment rates for local areas across the state. As a whole from December 2018 to 2019, New York’s private sector employment count increased by 97,700. However, New York’s seasonally-adjusted unemployment rate remained the same at 4% during that span of a year. Steuben County saw an increase in unemployment from 4.5% to 5% from 2018 to 2019. Officials explain the rates partially rely on results of the Current Population Survey, which contacts over 3,000 households in the state per month.

Steuben OFA Accepting Nominations for Older New Yorkers Day
Steuben County Office For the Aging announces they will accept nominations for the annual New York State Office for the Aging’s “Older New Yorkers’ Day” until February 14th. The Office For The Aging is looking for extraordinary people who are 60 and older who have made a real difference in their community. County RSVP Coordinator Christine Towner says the organization seeks “people who are the unsung ‘pillars of service’ in our neighborhoods.” Those selected will be invited to participate in the statewide celebration set for May 19th in Albany. Honorees in 2019 were Pulteney EMT Nancy Snyder and Finger Lakes SPCA and Ira Davenport volunteer Susan Arthur of Bath.

American Red Cross in Critical Need of Blood
The American Red Cross urges for more donations as they face a critical blood shortage. With the flu on the rise in NY state preventing some donors from giving blood and winter weather cancelling drives, the Red Cross announces the shortage and cites those factors as its cause. Those that are able to give are highly encouraged to do so. Here is a list of drives happening soon in Steuben County: