County Legislature Proposes 2020 Budget
Steuben County’s 2020 spending plan of $197 million, presented Thursday during a special workshop meeting of the county Legislature, calls for local costs to be offset in large part through a $2 million increase in projected sales tax revenues, some county reserves and interest, and cuts to local services. The public hearing and adoption of next year’s spending plan is slated for 11:30 a.m. Nov. 25. If adopted by legislators on Nov. 25, the tax levy will increase slightly to almost $50.5 million, which is slightly more than a one percent increase, while the average tax rate will drop $0.18, down to $8.07 per $1,000, a 2 percent decrease.

Shotgun Season in our Region Begins Today
New York’s deer and bear shotgun hunting season begins today in New York’s Southern zone. DEC reminds hunters that legal hours for big game hunting across the state are from official sunrise to sunset. In 2018, 13 hunting-related shooting incidents were reported in New York. By comparison…In 1966, there were 166 incidents, 13 of which were fatal. The local economy also picks up as out of area hunters flow in to Steuben County.

County Youth Board Award Nominations Due at the End of November
Nominations for awards recognizing individuals serving Steuben County youth will be accepted until the end of the month on November 30th by the County Youth Board. Nominations will be accepted for the 2019 Champion for Youth Award for a “behind the scenes individual actively supporting one or more youth programs within the county.” Nominations are also needed for the 2019 Youth Service Worker Award honoring a “line worker” providing direct service to Steuben Youth such as a career youth service worker, educator, coach and similar occupations. Individuals may be nominated by any person familiar with the person’s work but not from family members. Winners of both awards will be selected by the county Youth Board and announced at the Steuben County Youth Bureau’s Annual Dinner meeting set for February.

Local Vet and Legislator Roush Featured in Two National Magazines
Vietnam veteran and Steuben County Legislator Gary Roush, R-Erwin, has been featured recently in two national magazines. In the Smithsonian’s Air and Space magazine October issue, Roush recalled a particularly dangerous mission to rescue 23 wounded Americans at a military base on the top of a mountain obscured by low thick clouds. The treacherous weather prevented the smaller medevac UH-1 Hueys from rescuing the Americans. An honorably discharged U.S. Army Captain, Roush’s missions like delivering supplies and exploits like the dangerous rescue ultimately deprived him of his ability to hear, he wrote in the November/December issue of Hearing Life. “… I never let the label of Vietnam veteran -- or my hearing disability -- hold me back from being a productive member of society,” Roush said. “Through it all I learned that you have to make the best of the cards you’re dealt. And when it comes to hearing loss, you need to seek professional help when you need it.”

Troopers Want Info About Suspects Making Purchases in Horseheads
New York State Police in Horseheads are asking the public for help to identify suspects who bought over $13,000 worth of merchandise with stolen credit cards at several Big Flats stores. Troopers report that on October 31st, the two suspects bought about $13,500 worth of merchandise from Lowes, Target, Tops, Dick’s, Staples, T.J. Maxx, Ulta, Kohls and Best Buy with stolen credit cards. The duo reportedly was driving a dark-colored, newer model BMW which had an unknown, out-of-state registration. Anyone with information about this incident or these people (pictured below) should call the State Police in Horseheads at 607-739-0281. 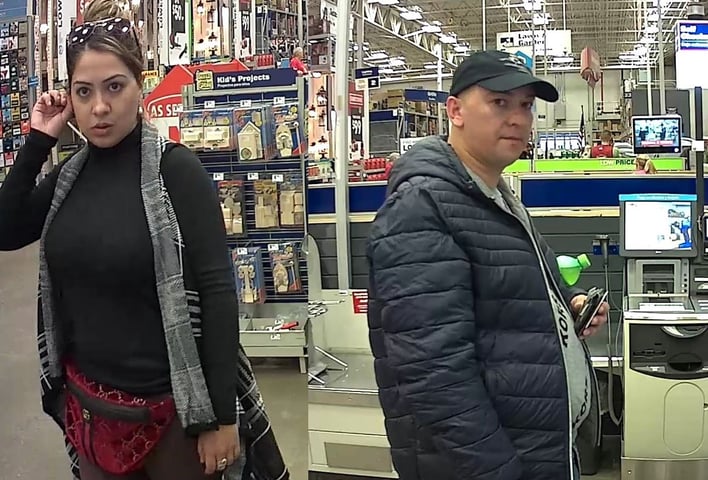