Posted about one year ago by Dee Thompson

A Corning man was killed Sunday night in a motorcycle crash on I-86.  39-year-old Alan VanEtten Jr. has been identified as the victim.  His vehicle was the only one involved in the accident, which occurred near Exit 45 (Riverside).  The cause is currently unknown, but state police have said there is nothing suspicious in nature about the accident.

A Bath man has plead guilty to charges related to the 2018 overdose death of a veteran in the Village of Bath.  30-year-old Justin Snyder has pled guilty to criminal sale of a controlled substance and criminally negligent homicide.  According to Bath Police, Snyder was arrested following a lengthy investigation into the overdose death of a 30-year-old man.  The man has not been named, but it is known that he was a Purple Heart veteran.  Snyder is scheduled to be sentenced in August.

Republican primaries will happen in 19 towns today.  Additionally, the Towns of Wayne and Canisteo will hold Conservative primaries.  Polls will be open from noon to 9 p.m.  There are no primaries for county elected officials and no primaries for other parties.  That means only registered Republicans or Conservatives will be able to vote.  Voters can check poll site locations and sample ballots online athttps://www.steubencony.org/Pages.asp?PGID=19.  Once again, the Attorney General’s Office will conduct an Election Day Hotline to troubleshoot and resolve a range of issues encountered by voters at their poll sites.  Voters experiencing problems or issues should call 1-800-771-7755 or email civil.rights@ag.ny.gov at any time between 6 a.m. and 9 p.m. today.

Landslide Closes One Lane on S.R. 54A Near Branchport:

A landslide has brought State Route 54A in the Town of Pulteney down to one lane, approximately 2.5 miles south of Branchport.  Both directions of traffic will be accommodated in one lane using temporary traffic signals.  The lane closure is expected to be in place for an extended period while repair options are evaluated and designed.  An updated travel advisory will be issued prior to the start of repairs.

The New York State Department of Transportation has announced that bridge joint replacement work will begin on State Route 352 over Interstate 86 near Exit 48 in East Corning today.  For the duration of the work, one lane of traffic will be maintained.  Work is anticipated to last approximately two weeks, weather permitting.  The DOT also announced that State Route 417 in the Town of Woodhull will be closed beginning today to replace a culvert and make drainage improvements.  It will be closed between County Route 129 and County Route 81 east of the Hamlet of Woodhull.  Traffic will be detoured via County Routes 119, 21, and 102.  It will be open to local traffic, but will be impassable between County Route 129 and Harder Road.  Work is anticipated to approximately last one week.

$65 million in funding has been approved by New York State for “Extreme Winter Recovery” to assist counties, towns, and villages throughout New York to maintain and repair local roads and bridges.  The funding was initially left out of the 2019-2020 state budget after years of being allocated through the state’s Consolidated Local Street and Highway Improvement Programs (CHIPS).  The restored funding was in legislation approved by the Senate late Sunday night.  The Assembly approved it early Monday.  Senator Tom O’Mara and Assemblyman Phil Palmesano, who have helped lead the campaign fighting for local roads, released a joint statement saying that they’re “glad it’s been restored because it is the absolute right thing to do.”

With it’s blooming season approaching, the New York State Department of Environmental Conservation is reminding the public to be vigilant for and to report sightings of Giant Hogweed.  The large, invasive, and dangerous plant is known to cause severe skin and eye irritation, including temporary or permanent blindness.  The DEC and its regional partners have confirmed Giant Hogweed in 51 counties across New York, with most of the active sites concentrated across Central and Western New York.  Officials say headway is being made to eradicate the plant.  Giant Hogweed can grow up to 15-feet tall and has 2-foot-wide umbrella-shaped canopies of flowers.  If you find Giant Hogweed, do not touch it.  Take photos of the entire plant (stem, leaves, flower, seeds), note the location, and send a report with the information to ghogweed@dec.ny.gov, text to (518) 320-0309, or call at (845) 256-3111.  If confirmed, the DEC will contact the landowner to discuss control options. 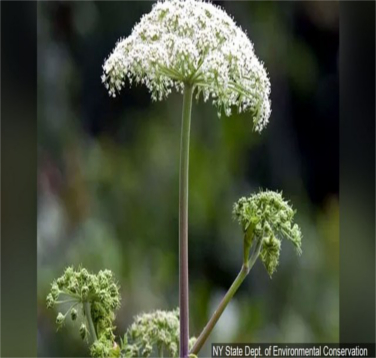 Early reports that upstate harness track and casino, Vernon Downs was in the running to be the new site of the Woodstock 50 festival appear to be accurate, as the Town of Vernon Supervisor has told the Poughkeepsie Journal that Woodstock 50 has applied for a permit to hold the concert at the site.  The owner of Vernon Downs also stated in an email Monday that they’re close to signing a letter of intent.  Vernon Downs is located approximately 35 miles east of Syracuse and it could host up to 65,000 people, but camping would not be available.  Woodstock organizers have not commented.