Just after 3 a.m. Monday, the Bath Volunteer Fire Department was dispatched to the area of the Steuben County landfill on Turnpike Road in Bath on a report of smoke.  Assistant Chief Joe Washburn was first on scene and he discovered flames moving across the top of the landfill.  He immediately requested to dispatch for a working fire and mutual aid was called in from nearby departments.  There were no structures involved in the fire and 2 pieces of heavy equipment were safely removed from the area by landfill personnel.  The fire was called under control just before 8 a.m. and all fire units were cleared from the scene by 8:30.  The landfill was open for business by 10:30 a.m.  In all, 16 fire departments were called in, as well as the Bath Volunteer Ambulance Corps and Steuben County Emergency Services. 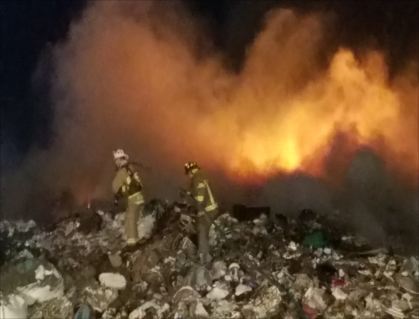 The Woodstock 50 event will have to find a new home if it hopes to go off as planned, as Watkins Glen International has officially ended its partnership with the festival.  In a statement released Monday, the track said it “terminated the site license for Woodstock pursuant to provisions of the contract” and as such “WGI will not be hosting the Woodstock 50 Festival.”  In response, festival organizers released a statement of their own, saying they’re in discussions with a new host and are still planning for the event to happen August 16th through the 18th and they “look forward to sharing the new location when tickets go on sale in the coming weeks.”

As expected, Monday, the New York State Gaming Commission has voted in favor of allowing sports betting at four upstate casinos, including Tioga Downs and Del Lago.  Bets won’t be able to be made until the facilities receive their wagering licenses, which likely won’t be until later this summer.  Additionally, tribal casinos are also planning to allow betting.  Legislation that would authorize wagering at sporting venues or on mobile devices has been introduced in the state Legislature, but so far has not received a vote.

Corning will host its first ever Pride event this weekend at Centennial Park.  The event will run Saturday from noon to 4 p.m., and it will be free to attend, offering everyone the chance to come together and applaud everyone’s freedom to be themselves.  Participating in the event is the Corning Museum of Glass, which will be offering free admission on the 16th and 17th to those who show their button from the Pride Celebration on the 15th.  The Museum will have a Pride-themed tour and visitors can enjoy brand-new rainbow-colored selections for Make Your Own Glass projects.