The man wanted by Elmira Police for allegedly failing to register with the sex offender registry has now been arrested, authorities confirm.  Delmar Hooks was also wanted for criminal trespass and unlawful possession of marijuana.

The New York State Police are asking the public to help identify and locate a man they say is wanted for multiple shoplifting incidents.  The suspect is described as a white man with a small build, in his 20s.  The incidents happened at the Walmart stores in Painted Post and Horseheads in February.  Anyone with information should contact the State Police at (607) 962-6864. 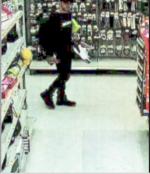 New York Governor Andrew Cuomo announced Wednesday that there is no need to wait for lawmakers to act and that he has now directed state higher education officials to expand the existing Military Enhanced Recognition Incentive and Tribute scholarship program immediately.  The expansion will grant free tuition and room and board to public colleges and universities – or an equivalent scholarship to attend private schools - to the families of New York military members killed or disabled while on duty.  While Cuomo said the expansion is expected to cost “several million dollars,” he added that it’s a small price to honor the sacrifice of fallen service members and their families.

Travel Advisory – Work to Begin on S.R. 54 in Wayne Monday:

The New York State Department of Transportation has announced that work will begin on Monday on State Route 54 in the Town of Wayne near the intersection of Hines Road.  Traffic will be reduced to one lane, with motorists guided through by flaggers.  Delays should be expected.  Work is anticipated to be completed by the end of the month, weather permitting.

Preliminary work on Steuben County bridges in under way, with eight projects slated for work in 2019.  Currently, work is in progress on Spaulding Road over 10 Mile Creek in the Town of Wheeler and Nicholson Road over Campbell Creek in the Town of Howard.  Plans call for the work to be completed by June.  Other projects, with tentative start dates, are: Beartown Road over Weaver Hollow Creek in Erwin and Lyons Hollow Road over Lyons Creek in Prattsburgh on May 27th, C.R. 4 over Curtis Creek Tributary in Campbell on July 8th, C.R. 119 over the Canisteo River in Cameron on July 22nd, Clymo Road over Neils Creek in Avoca and Taggart Road over the Keuka inlet in Urbana August 12th – 19th.

A new Sienna College poll released this week finds that a majority of New Yorkers support the recently passed plastic bag ban.  Of those surveyed, 62 percent approved while 33 said they’re against it.  In the same poll, 63 percent of respondents said they’re opposed to the approved pay raise for Governor Andrew Cuomo.  The Governor will receive an annual salary of nearly $250,000 by the year 2021.

Reed Campaign Raises Over $347K in First Quarter:
Representative Tom Reed is off to a strong start in his re-election campaign.  The incumbent has raised more than $347,000 in the first quarter of this year, which is more than 15 times the amount raised by challengers Tracy Mitrano and Dr. Scott Noren.  Mitrano has reportedly raised over $22,000.

Field of Flags Returning for GlassFest 2019:

Organizers of the 2019 Corning Gaffer District’s GlassFest have announced that the Field of Flags will be returning for this year’s event.  As many as 270 flags will be on display in Riverfront Centennial Park throughout the event.  If you’re interested in sponsoring a flag for a veteran, or in buying one for yourself, you can get more information at https://www.gafferdistrict.com/fieldofflags.  GlassFest 2019 will be held the weekend of May 24th.

The New York City Board of Health voted unanimously Wednesday to extend an emergency declaration made last week that orders mandatory measles vaccinations in four Brooklyn ZIP codes.  The order – which applies to children ages 6 months and older - will end when health officials declare the emergency is over.  The city has confirmed 329 cases of measles since the outbreak began in October.