Steuben County Men Arrested Following Thurston Robbery
Two Steuben County men have been arrested following a report of a burglary and larceny in Thurston. Steuben County Sheriff’s Office Criminal Investigation Unit investigated a reported burglary and larceny on Bryan Road in the Town of Thurston on February 28th. The following day on March 1st, 24-year-old Garrett Ragusa of Thurston was arrested and this week, police arrested 18-year-old Damon Harris of Painted Post. The arrests followed after the Steuben County Sheriff's Office named the duo on Twin Tier's Most Wanted on WETM. Both men were charged with Burglary in the third degree and Grand Larceny in the third degree, both Class D Felonies then remanded to Steuben County Jail.

Free Tax-Filing Resources Available to Low Income New Yorkers
A reminder that free resources available for New York residents until the Tax Day deadline on April 15. Taxpayers earning household incomes of $66,000 or less in 2018 are eligible to e-file their returns at free tax assistance sites. Tax Department experts will be available at each of these sites to help low and middle-income New Yorkers file their taxes at no charge. The state has also partnered with seven community colleges in New York State to help college students, faculty, and staff electronically prepare and file their income tax returns for free. Free Tax Assistance, Tax Preparation Software and Tax Credit information can be found online at www.tax.ny.gov

Arnot Ogden Thrift Shop Specials Fund Medical Center
Starting this week, the Arnot Ogden Medical Center thrift shop has a 50 percent off sale on winter clothing marked at $1 or more until March 22. It’s located at 619 Hart Street and open from 10am to 4pm Tuesdays, Thursdays and Fridays. All of the Thrift Shop’s proceeds go to the Arnot Ogden Medical Center. Once this sale is over, items left over will be available again during their Bag Sale where you fill a large paper grocery bag with clothes for only $3. The Bag Sale will last until April 4th then the thrift shop will be restocked with spring and summer clothing. Call (607) 732-2995 if you are interested in more information.

Cornell Study Says Apple Industry Bigger Than We Thought
Apples are a big deal in New York but a Cornell University team recently found the economic impact of the apple industry in our state to be even bigger than we thought! Researchers tested the apple industry as a case study to apply new economic framework for analysis and found that the apple industry is 21 percent larger than traditional models have reported. The new analysis takes into account the locally sourced data that shows what and where exactly farmers spend their income, a change from the traditional economic analysis only taking into account secondary state and national data.

Corrections Officers Honored for Role in Incident
Seven Steuben County Corrections Officers of the Steuben County Sheriff’s Department were recognized for saving the life of an inmate last month in February. Jonathan Mullikin, William Burd, Daniel Cox, Brian Flynn, Jennifer Smith, Brandon Owen, Brian Harrison, Angelo Sciotti and Sgt. Ryan Thompson were all recognized at the most recent county Legislature’s Public Safety and Corrections Committee meeting where Sheriff Jim Allard praised the actions of the seven officers as having prevented a “catastrophe” and noted that the inmate suffered no lasting ill effects as a result of the incident. 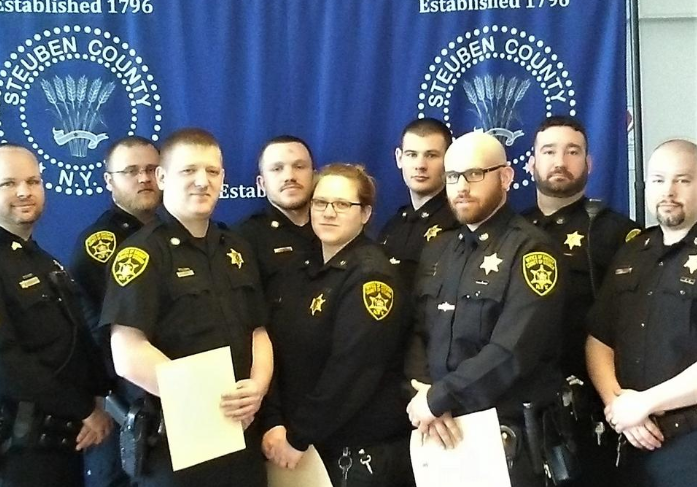