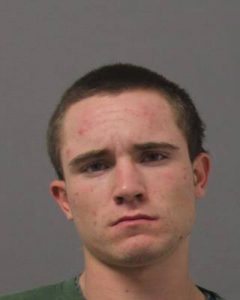 The Steuben County Sheriff’s Office reports the arrest of a Rathbone man following an incident in Addison.  Deputies responded to Front Street on March 1st to check the welfare of a woman who called 911, was screaming, and became disconnected.  She was later located at the address of 28-year-old Devon Hough, of Merring Road in Rathbone.  It’s alleged that Hough damaged the property of another, endangered a child in the residence, and prevented the victim from calling 911.  It’s further alleged that Hough had been previously convicted of criminal mischief in the fourth degree in connection with a family offense.  Hough was charged with aggravated family offense, criminal mischief, and endangering the welfare of a child.  He was arraigned and sent to the Steuben County Jail in lieu of $5,000 cash bail.

An off-duty investigator at the State Police barracks in Painted Post has been charged with driving while intoxicated following an accident on I-86.  Troopers responded to the scene of a two-vehicle accident in the eastbound lane in the Town of Corning on March 1st where a vehicle was struck from behind.  53-year-old Senior Investigator Randy Hugg was identified as the driver that struck the other vehicle.  He was treated for minor injuries at the hospital and was released.  The occupants of the other vehicle were not injured.  The investigation is ongoing.

Owner of Lloyd’s Limited to be Sentenced Today:

The former owner of Lloyd’s Limited in Penn Yan is expected to be sentenced today in Yates County Court.  61-year-old Bob Champlin pled guilty in December to sexually abusing two women on Christmas Eve 2017 inside the establishment.  He could have faced 25-years in prison, but under the plea, he will receive no more than 3 years.

The Town of Prattsburgh has proposed three local laws that will change the terms of office for some elected officials. The proposed legislation would change the terms from two years to four years for the Town Supervisor, Highway Superintendent and Town Clerk. However, before the initiatives advance, the town board first has to hear from the residents. The Board has scheduled three five-minute hearings on each proposed law. They are scheduled to begin at 7 p.m. on March 18th. The hearings will be held at the Town Hall on North Main Street.

Both the New York State Assembly and Senate have passed legislation that would require gun owners to keep their firearms in a locked cabinet or equipped with a trigger-locking device if there is a child under the age of 16 in the home.  Those that fail to do so would face a misdemeanor charge.

Environmental Project Coordinator for the Steuben County Department of Public Works, Rich Bills, has been elected vice president of the state Association For Solid Waste Management.  A SUNY Binghamton graduate, with a degree in Biology, Bills has worked for the county since 2008.  He currently operates the leachate pretreatment facility and oversees two staff members.  The association works to promote effective, efficient, and environmentally sound practices in solid waste management throughout New York.