One of the dogs recently rescued from a property in Addison is now missing after it ran away from its new caretaker.  "Hutch," as the dog is known, was last seen near the Wegmans in Corning.  He has been missing for five days.  According to Tanner's P.A.W.S., it's possible he was spotted in Big Flats. 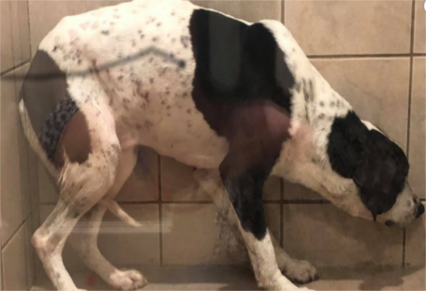 State Trooper Suffers Minor Injuries After Being Struck by Car:

A vehicle on I-86 failed to comply with the Move Over law on Wednesday and struck a state trooper.  Trooper Jacob Wackowski was reportedly assisting a parked vehicle in the eastbound lane in Corning when he was struck by a passing tractor-trailer.  He was taken to Corning Hospital for minor injuries and was later released.  53-year-old Troy English of Buffalo, the driver of the tractor-trailer, was issued tickets for failure to obey the move over law, along with other vehicle and traffic violations, and he also allegedly had numerous warrants in North Carolina and Pennsylvania.  English was arraigned and sent to the Steuben County Jail on $500 cash bail.

David Perry, the former West Elmira man, who has been arrested multiple times on charges including burglary, insurance fraud, and faking his identity has now been sentenced to a year in prison on criminal trespassing charges.  The charges stem from an incident in 2018, though details are unknown at this time.  Information is expected to be released at a later date.  Perry has also long been a person of interest in the disappearance of his live-in girlfriend, Kelly Rothwell.  Rothwell went missing in Florida in 2011.  Perry has never been charged in her disappearance.

Painted Post police have identified a suspect in connection with the theft of a package in the village last week.  Amber Schoch is currently incarcerated in the Tioga County, Pennsylvania jail on unrelated charges.

Grape Research Lab to be Built in Finger Lakes:

Senator Chuck Schumer has announced $68.9 million in funding for a federal grape research lab that will be built in the Finger Lakes.  The federal Grape Genetic Research Unit at Cornell AgriTech in Geneva will, according to officials, help researchers develop higher quality, disease resistant grape varieties.

The United Way of the Southern Tier will be able to better serve at-risk children and families thanks to a $1.5 million state grant.  The nonprofit will use the funds to expand the Southern Tier Kids on Track initiative.  The program supports early childhood development by working with schools, providers, and local businesses.  The money will also be used to assist older at-risk children.

The Corning Rotary Club is inviting all students, families, and the general public to attend the Scripps Regional Spelling Bee on March 9th at 9 a.m. at the Corning-Painted Post Middle School.  The event is free and open to the public.  This year’s Bee will see 60 students from 30 area schools competing to be the region’s representative in the 2019 Scripps National Spelling Bee in the Washington D.C. area.

The Board of Education of the Haverling Central School District will hold a special meeting tonight at 6:30 p.m. in the High School Library.