Anyone with information regarding several abused dogs found in Addison is being asked to contact the Painted Post state police or the Town of Addison dog control officers.  The five animals, all of which appear to be in bad shape, were recently spotted on the side of Mose Road near the Equine Inn.  One of the dogs seems to have injuries that may need medical attention.  An individual was able to take photos of the dogs, but wasn’t able to catch any of them.  According to WETM 18 News, multiple tips have been made to police as to the possible owner of the dogs, and it appears the situation may have been ongoing for a long time. 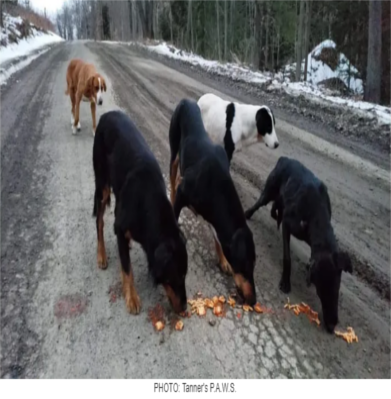 To eliminate a multi-billion shortfall in the state budget, Governor Andrew Cuomo has proposed, among other measures, closing three state prisons.  The proposal would see three of the state’s 54 correctional facilities closed by no later than September 1st.  Which facilities those might be is unknown.  Cuomo said they would be chosen after a review by state corrections officials.  Cuomo promised that the closures won’t result in staff layoffs.  The New York State Correctional Officers and Police Benevolent Association immediately came out against the plan, saying it will make prisons more dangerous, disrupt the lives of employees, and devastate local economies.  The proposal must be approved by both the Assembly and the Senate. Other cost-cutting proposals on the table include several changes to the Medicaid program, and allowing towns to use additional sales tax revenue from an elimination of the tax advantage out-of-state online retailers can have by not collecting New York sales tax.

In a press release Monday, State Senator Tom O’Mara denounced a move by Governor Andrew Cuomo to restore a proposed cut to state funding for area town and villages by imposing what O’Mara called “yet another unfunded state mandate on counties.”  In his proposed budget released last month, Cuomo called for the elimination of AIM funding, or Aid and Incentives to Municipalities, for most of the town and villages across the Southern Tier and Finger Lakes.  After pressure, the governor reversed his decision by amending his budget plan to restore the funding by shifting the cost responsibility from the state to counties.  O’Mara says the shift is the latest example of a state government that’s “out of touch and out of control.”  It’s estimated that the AIM cut will affect 1,326 of New York’s 1,465 towns and villages.

New York State will join in a lawsuit with California and 14 other states in challenging President Donald Trump’s recent national emergency declaration.  President Trump made the declaration on Friday, looking to shift billions of dollars for construction of a border wall after Congress wouldn’t approve the amount he wanted.  The money for the proposed wall would be diverted from funding for military construction and other programs.  New York Attorney General Letitia James said Monday that Trump is threatening public safety with the move.

With help from NextEra Energy Resources, Watkins Glen International will soon be the home of the largest solar field at any racetrack in the nation.  WGI President Michael Printup announced Friday that the track is donating land for a 50-megawatt solar energy center, which will be owned and operated by a subsidiary of NextEra.  It will be located adjacent to racetrack.