A 33-year-old Bath man has been charged with online enticement of a minor and distribution of child pornography.  William Reed was intercepted by State Police and members of the Department of Homeland Security while allegedly on his way Monday to meet a 9-year-old for sex.  At the time of his arrest, police say Reed was in possession of condoms and candy.  Reed is being held in federal lockup pending a detention hearing.  He faces up to 10 years in prison.

The Democratic challenger for State Senator Tom O’Mara’s 58th District Senate seat has been accused of domestic violence by her ex-wife.  According to the Ithaca Times, Amanda Kirchgessner’s ex-wife told them Kirchgessner took part in a pattern of abusive behavior, including: pushing, grabbing, throwing objects, verbal abuse, and possible threats against pets.  The State police were reportedly called to an incident involving the couple in 2015.  Kirchgessner says she will be staying in the race despite the claims.  The 58th Senate District includes: Chemung, Schuyler, Steuben, and Yates counties, and a portion of Tompkins County.

ServU Federal Credit Union and Haverling High School officially opened their joint project Wednesday, a student-run Credit Union branch at the high school.  “The Vault,” as it’s known, is managed by eleven Haverling students and multiple ServU staff members that will together operate the branch during lunch hours twice a week.  The goal is to instill students with lifelong, worthwhile lessons such as how to use a debit card, how to balance a check book, identity theft, and more.

At their Open House event Wednesday, the Arc of Steuben debuted a new look.  Joining the national brand, The Arc has a new logo that will be on their publications, website, signs, community events, and more.  In a press release, officials say the new logo will unite their affiliated chapters across the country under the banner “Achieve With Us,” a call to move forward and take the road leading to progress, inclusion and respect.  They hope the new orange and yellow color combination will become as closely associated with The Arc as pink is associated with breast cancer awareness. 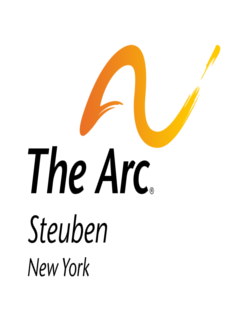 The upcoming Southern Tier Outdoor Show at the Steuben County Fairgrounds on October 13th and 14th will play host to two important firearm classes for interested attendees.  Both classes – New York Permit Legalities and Firearm Safety, and Utah/Florida Multi-State Carry Permit – will be offered by Rochester Personal Defense LLC.  The price of the classes will be $49, and $120, respectively.  To register for either class, visit https://www.southerntieroutdoorshow.com or call (607) 664-2300.