While rain and storms may have had a dampening effect on attendance early in the week, officials with the Steuben County Fair said crowds, and spirits, were good during the last few days of the show.  The cloudy skies did not keep thousands of fair-goers Sunday from enjoying the rides, 4-H and historical exhibits, and food and games vendors on the closing day of the 199th Steuben County Fair. 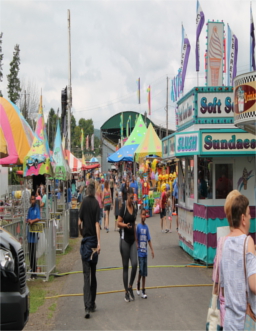 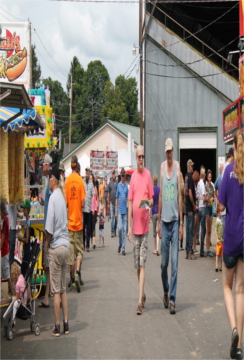 A man from Maine has been charged with assault after he allegedly struck a man from Prattsburgh with his truck intentionally.  The incident happened in Ontario County on Recreation Drive in the Town of Hopewell around 5 a.m. Friday morning.  Police say they arrived on scene and found 32-year-old Jesse Gettings in the Applebee’s parking lot complaining of leg and internal injuries.  Witnesses told police a Ford Ranger truck intentionally hit Gettings and then headed east on State Routes 5 and 20.  The truck was located a short time later in Geneva.  The driver, 30-year-old Keir Groose-Rhode, was charged.  A portion of Recreation Drive was shut down for approximately 3 hours.  Gettings was at Strong Memorial Hospital as of Saturday afternoon.

Greenwood firefighters were called out just after 11 a.m. Sunday when flames consumed a motor home parked behind a residence on State Route 248 near County Road 62.  Steuben 911 reported that flames were reportedly visible.  Additional help was initially requested from Canisteo and West Union.  The fire was declared under control within 29 minutes.  While crews were battling the fire, a second emergency was reported at the Greenwood fire station.  A man had apparently been injured in a lawn mower rollover accident.  The victim was brought to the fire station.  An ambulance crew was alerted and LifeNet 77 medical helicopter was requested.  Officials decided to land the helicopter at the fire scene.  Sheriff’s Deputies are investigating the lawnmower accident and fire investigators were requested at the scene of the fire.  The extent of the man’s injuries in the lawnmower accident is unknown.

Representatives from 19 counties in western New York met Friday at the Steuben Brewing Company for updates on state and local issues.  The Western NY Intercounty Association meeting included an introduction on the future utility rates reduction for municipal buildings through shared services.  Steuben Brewing representatives also gave a presentation on how “Community Support Agriculture” has benefited their business and supports local and agri-business industries.

Families in Steuben County struggling to afford school supplies will get some help this Thursday, when the Salvation Army will be holding a backpack distribution event.  Each backpack will contain school supplies for students in kindergarten through 12th-grade.  Students will get supplies based on the supply lists given by their respective school district.  Distribution is from 3 to 6 p.m. at the Salvation Army’s offices on Denison Parkway in Corning.

In September of 2017, Emmy-nominated travel personality Darley Newman and her Emmy-winning crew explored the Southern Finger Lakes region for the fifth season of the popular PBS show Travels with Darley.  They created two episodes which aired locally on WSKG in April 2018; they were the show’s first time featuring a destination in New York State.  If you haven’t seen the episodes yet, you’ll have another chance as the fifth season will run as a marathon on the WSKG Create Channel on Saturday, August 25th.  It begins at 6 a.m. and runs through noon, and then again at 6 p.m. until midnight.  It will also air on Sunday, August 26th from noon until 6 p.m.  Episode #501 features the Southern Finger Lakes and it will air at 6 a.m. and 6 p.m. on the 25th, and then at noon on the 26th.