The man accused in multiple burglaries throughout the Corning area will appear in Corning City Court today where he is expected to be arraigned for Burglary in the 3rd degree.  55-year-old James Copeland, a convicted felon, was arrested on Friday in connection with the theft of power tools from a Denison Parkway business.  Police believe Copeland also committed several other burglaries at area businesses and locations.  Copeland allegedly sold the stolen power tools to unsuspecting citizens.  Anyone who recognizes Copeland as someone they recently purchased power tools from is asked to contact the Corning Police Department. 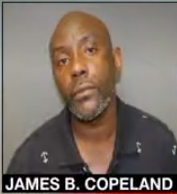 A Rochester man is facing drug charges following a traffic stop in Bath.  According to the County Sheriff’s Office, deputies stopped a vehicle being driven by 27-year-old Korey Weaver on State Route 415 on Saturday for inadequate lights.  Weaver was allegedly discovered to have 93 individual baggies in his possession that contained suspected crack cocaine, a large amount of U.S. currency, and other drug paraphernalia and packaging material used for selling narcotics.  Weaver was charged with criminal possession of a controlled substance in the third degree (with intent to sell).  He was sent to the Steuben County Jail in lieu of $50,000 cash bail.

A Campbell man has been arrested following a reported domestic disturbance in Campbell.  30-year-old Justin Morse is accused of choking another person and holding that person against a vehicle by the throat.  Morse was charged with criminal obstruction of breathing and harassment in the 2nd.  Morse was sent to the Steuben County Jail in lieu of $1,500 cash bail.

Bath Electric, Gas and Water Systems will be replacing a gas main on Gansevoort Street, between East Washington Street and East Steuben Street, in Bath.  Work is expected to start on Monday, June 11th and will continue through until the end of July.  To protect the public and BEGWs workers, the street will be closed.  Local access and access for emergency vehicles will be maintained during construction.  The intersections of East Washington/Gansevoort, East William/Gansevoort, and East Steuben/Gansevoort will be closed periodically as crews cut the pavement and replace the gas main across the intersections.  If you have any questions, you can contact BEGWs at (607) 776-2173, Option 2.

The Dormann Library Board of Trustees will hold a budget hearing on Tuesday, June 12th at 5 p.m. in the Empire Room.  The public is invited to learn what the library has to offer and how it is supported prior to the tax levy vote, which is set for Thursday, June 14th from noon to 8 p.m. at the library.  Board members will be on hand at the meeting to answer questions.

Monday night the Chemung County Board voted to issue bonds of nearly $5.5 million in additional funding for the Elmira-Corning Regional Airport’s reconstruction project.  The extra funds are needed to finance the tower portion of the terminal.  Officials say tax payers shouldn’t be worried, that the additional cost will be paid for with Passenger Facility Charges that are designed to be paid over the next 10 years.  Work on the airport is expected to be completed by October.

Tablets for Inmates Program Could be Coming to Steuben Co. Jail:

A program that would provide access to tablet computers for inmates could soon be coming to the Steuben County Jail, after the county Legislature Public Safety and Corrections Committee advanced the plan on Monday.  The program is an expansion of the jail’s existing contract with GTL, the company that provides phone services at the jail.  According to Sheriff Jim Allard there are a lot of advantages to the tablets, such as money from purchases on them – which comes from the inmates’ commissary funds – going back into jail operations and help to pay for activities such as the inmate dog training program and the inmate garden.  Also, Allard said other facilities that have adopted the tablets or similar systems, have seen decreases in inmate-on-inmate violence and a decrease in assaults on staff.  Communications through the tablets, like phones, are monitored.  The tablets would be provided at no cost.