Two men from Bath have been arrested after police say one of them purchased a gun for the other, who is a convicted felon.  According to the New York State Police in Bath, Jason Christian allegedly purchased a rifle for Brand Plank at Louie’s Gun Shop in the Village of Bath.  Christian has been charged with criminal purchase or disposal of a weapon, and offering a false instrument for filing, both felonies.  Plank is facing a felony charge of offering a false instrument for filing, and a misdemeanor charge of criminal possession of a weapon.  Christian was released on his own recognizance.  Plank was sent to the Steuben County Jail on $10,000 cash bail.  Police say that Louie’s was unaware of the transaction between Christian and Plank, and is cooperating in the investigation.

The woman convicted in the arson murder of David O’Dell in Wayland has been sentenced.  Iryn Meyers will serve 23 years to life on a murder charge, 20 to life on two arson charges, and 16 to 48 months on conspiracy charges.  All the sentences will run concurrently.  She has also been ordered to pay $16,800 in restitution.  Meyers husband, Joseph Meyers, was sentenced to 23 years to life back in July.

An Elmira man has been convicted of assaulting a child in the Town of Bath.  29-year-old Steffan Miller has been convicted of assault in the 2nd degree, a violent felony, and endangering the welfare of a child.  The assault occurred at a residence in the Town of Bath on November 17th while the 8-month-old victim was in Miller’s care.  The victim’s mother returned home to find the child injured and requiring immediate care at both Arnot-Odgen Medical Center and Strong Hospital.  Sentencing has been scheduled for December 19th.  Miller faces up to 7 years in prison.

At its November meeting, the Town of Erwin Board will hold a public hearing regarding the possible extension of the Cold War Veteran Property Tax Exemption.  The board plans to vote on the law following the hearing.  The exemption provides New York veterans who served in the military during the cold war anytime from September 2nd 1945 to December 26th 1991 with a partial exemption of either 10 or 15 percent on their property taxes.  The exemption has been in place for 10 years and was set to expire this year, but the state extended it indefinitely, setting up a local option for communities to choose whether or not to adopt it.  The public hearing will be November 14th at the Town Hall a 7 p.m.

The Bath Fire Department had a unique training drill this week.  Borrowing an idea from another department, members used the Jaws of Life to play Jenga.  The idea was to move rough cut hardwood cribbing and a raw egg without breaking it.  In a press release, the department said that it may sound like a strange way to train, but when in an emergency situation, seconds count and so do the moves that are made.  Many times it has to be done in very close proximity to the person being rescued and the rescue spreaders can be very dangerous, with a squeeze pressure of roughly 14,000 pounds per square inch and 16,000 pounds of spreading force.  So if a lever is pushed in the wrong direction or a move is too aggressive, it could be disastrous.  The department said the drill was very successful, with lessons learned and many laughs had along the way. 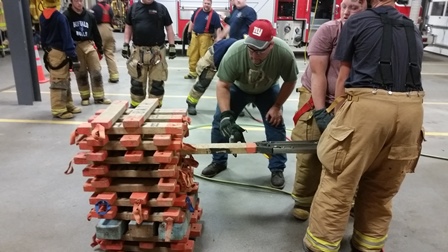 The generosity of Corning Glass founder, Amory Houghton and his family continues as nearly 200 acres of land, previously owned by the Houghtons, has been donated to the Town of Corning and the Finger Lakes Land Trust for public use.  Located just outside downtown Corning, just before Corning Community College on the right side, is a professionally designed and interpretive kiosk and then several miles of trails the public can enjoy.  Visitors can enjoy wildlife watching, hiking, cross-country skiing, and dog walking.