A second Steuben County town is seeking to override the state property tax cap. The Town of Campbell will hold a public hearing Monday, October 16th on a local law giving the town the authority to exceed the tax cap. That hearing will be held at 7 p.m. at the town hall.

If you’re looking for employment, or looking to change your current job, your chance could come tomorrow with the Corning Area Job Fair.  The event will be held at the Nasser Civic Center Plaza from 10 a.m. to 1 p.m., and 22 employers are expected to attend.

A Fire Prevention Open House will be hosted by the Forest View Gang Mills Fire Department on Sunday from 11 a.m. to 3 p.m. at the fire station.  The event will include home gas safety tips from Corning Natural Gas, the American Red Cross home fire campaign, a K-9 unit from the Steuben County Sheriff’s Office, and the LifeNet 77 helicopter.  There will also be food, prizes, displays, a bounce house and slide.

The New York State Department of Transportation has announced work will begin on October 10 on State Route 21/36 south bound in the City of Hornell.  Work will include bridge deck repairs over the Canisteo River. While work is being completed, the driving lane and shoulder on State Route 21/36 south bound will be closed to traffic. Traffic will travel through the open lane with no speed reductions. The duration of the work is expected to be approximately 2 weeks.

As “bump stocks” make headlines after it was revealed Las Vegas shooter Stephen Paddock used them in his rampage, state lawmakers are clarifying their illegal status in New York.  While New York does not explicitly outlaw bump stocks, the state Penal Law does prohibit machine guns or “any other firearm or weapon simulating a machine gun.”  So using a bump stock to make a semi-automatic rifle simulate a machine gun is a Class D felony.  New York Attorney General Eric Schneidermen even went so far as to say that a semi-automatic rifle modified with a bump stock would actually be considered a machine gun under state law.  To make the law more clear, a bipartisan group of lawmakers has introduced a bill that would specifically outlaw the possession or manufacturing of bump-stock mechanisms and others that make semi-automatic weapons simulate machine guns.  In something of a surprise move, the National Rifle Association, which has long been an outspoken opponent of gun-control proposals, issued a statement Thursday stating support for “additional regulation” of bump stocks.

After more than 18,000 votes cast, a design has been chosen for the “I Voted” sticker that will be distributed at polling places across New York this Election Day.  The new sticker is in celebration of the 100th anniversary of women’s suffrage in New York, which was passed on November 6th 1917.  Online voting took place between September 25th and 29th with the winning design receiving more than 9,000 votes.  The winning sticker features “General” Rosalie Jones, a New York suffragist who led a 150-mile hike, on foot, from New York City to Albany in December 1912.  Upon arriving in Albany, the marchers presented Governor-elect Sulzer with a petition.  The winning sticker will be printed and distributed to Boards of Election in each county to be given out on Election Day, November 7th. 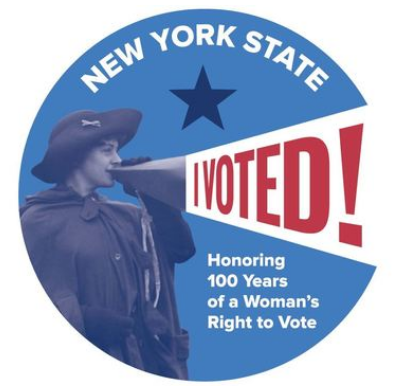