The trial of the Hornell man accused of beating an infant to death is ongoing in Steuben County.  Tuesday, the prosecution called five witnesses to the stand, including the victim’s mother, the Monroe County Medical Examiner, and a pediatric critical care doctor that handled the victim.  A final witness is expected to be called today, and then the defense will begin presenting its case.  23-year-old Dakota Miller faces charges of aggravated murder, murder, and manslaughter in the 2015 death of 18-month-old Ian Maniski-Huff.

A Troupsburg man has been charged following a one car accident on State Route 36 involving a construction sign.  According to police, 27-year-old Kenneth Welch collided with a roadside digital billboard VMS trailer around 11:30 p.m. on June 6th.  The sign was in place to warn drivers of upcoming construction.  Welch allegedly attempted to cover up his involvement by removing evidence and leaving the scene.  He was issued appearance tickets for reckless driving, leaving the scene of a property damage accident, criminal mischief, and obstruction.

Legislation has been introduced by U.S. Senator Kirsten Gillibrand to help protect Americans from increasing prescription drug prices.  The “Stop Price Gouging Act” would create penalties for pharmaceutical companies that engage in price gouging and the Senator believes it could result in billions of dollars in savings.  Besides the penalties, the act would also require corporations to report any price increases and their justification, requires an accountability office study of launch prices and suggestions for best practices of new drug pricing, and reinvests money collected from companies into future drug research.

Congressman Tom Reed says he will support two bills proposed by the GOP that would allow Congress members to carry weapons in Washington D.C., and allow members of congress to carry guns to public events in their home districts.  Reed made the comments during his weekly press call in response to questioning about last week’s shooting of a Congressman in Virginia.  Reed also expressed his openness to exploring whether more measures are needed to prevent those with excessive criminal history from buying guns, and he said he believes addressing mental health should come first.

As expected, Governor Andrew Cuomo signed legislation into law Tuesday that officially raises the age of marriage in the state from 14 to 17.  The new law requires 17 and 18-year-olds to get judicial and parental approval before marrying.

Students at Campbell-Savona Elementary School were rewarded for a year of good behavior Tuesday with the school’s first annual Panther Palooza.  The party is part of the PBIS, or Positive Behavior Intervention and Support Program.  Every time a student demonstrated good behavior or was kind over the year they were awarded a “Panther Paw,” and from Pre-Kindergarten to 6th grade, students earned over 40,000 paws over the school term.  The celebratory Panther Palooza included bounce houses, outdoor activities, and a dunk tank.  The school already plans to continue running the program next year and beyond.

If you were planning on having some fun in the sun and water on Seneca Lake this summer, take care following a toxic algae bloom warning issued by the state Department of Environmental Conservation.  The toxic algae is harmful to humans and lethal to animals and the DEC advises to “avoid all contact, keep pets and children out of the water, and don’t use the water for any purpose.”  The algae can have a variety of appearances, but are usually floating on the water.  They can come in clumps or streaks, and when particularly dense, they can look like green paint on the water.  If you spot an algae bloom, notify the DEC at 518-402-8179.  For more information visit https://www.dec.ny.gov/chemical/77118.html 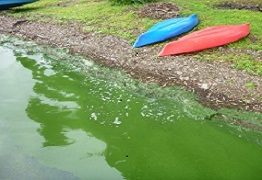 The New York State Fair is getting extra “crafty” this summer, as Governor Andrew Cuomo has announced that breweries across the state will be competing in a professionally judged craft beer competition.  The competition will feature 20 categories, with brewers allowed to enter as many beers as they want.  The fair runs August 23rd to September 4th.

Would a grape by any other name taste as sweet?  That’s what Cornell University is looking to find out.  They’re holding a competition to name a new breed of grape developed by breeder Bruce Reisch.  He’s a professor of grapevine breeding and genetics in the University’s College of Agriculture and Life Sciences that has spent years developing the new grape, which he says is well adapted to the Northeast.  The grape is currently known only as NY98.0228.02.  It’s seedless, flavorful, and similar in appearance to a Concord grape.  Submissions can be made online https://hort.cals.cornell.edu/content/name-grape or by emailing nameit@cornell.edu until July 31st.  Reisch and his collaborators at Double A Vineyards will pick their favorites, and then the public will decide in a final vote in September.