Friday a Steuben County Jury convicted a Wayland man of first degree murder, two counts of arson, and three counts of falsifying business records in the fatal 2016 Wayland fire that killed David O’Dell.  After the verdict was read Joseph Meyers was sent to the Steuben County Jail.  Sentencing is set for June 19th.  He faces a possible life sentence.  Meyers’ wife also faces charges in the case.  Her trial begins on July 5th.

The New York State troopers of Bath have announced the arrest of a parole absconder in the Village of Bath.  29-year-old Donald Rundell, initially convicted of rape and recently paroled, was located at a residence on Pine Street and was taken into custody.  He was sent to the Steuben County Jail without bail.

Steuben County legislators are expected to approve a new partnership for substance abuse treatment when they meet in regular session at 10 a.m. today in the County Office Building. A proposed medically managed detoxification program will be located at Arnot Health Ira Davenport Memorial Hospital with the county Community Services’ Steuben County Alcohol & Substance Abuse Services (SCASAS) providing onsite substance abuse evaluations of individuals receiving treatment through the hospital’s detoxification program. If approved, the program is the latest effort in Steuben to help victims of substance abuse, now at epidemic proportions.

Regional law enforcement officers fallen in the line of duty were honored Saturday at the third annual Law Enforcement Memorial Service at the Steuben County Public Safety Building.  The ceremony concluded National Police Week and commemorates those in Steuben, Allegany, Chemung, Livingston, Ontario, Schuyler, and Yates counties who made the ultimate sacrifice in serving their communities.  County Sheriff Jim Allard noted the day was even more meaningful by injuries suffered by state Trooper Craig Foglia during a traffic stop earlier in the week.  Foglia remains in serious condition in Strong Memorial Hospital in Rochester. 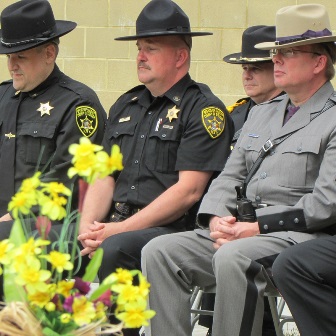 Despite reaching a deal with a new owner in March, the Chemung County Industrial Development Agency is still paying to keep the First Arena open.  That’s because of a provision in the $3.5 million deal that allows Brian Barrett to find a new hockey team to replace the Elmira Jackals before he becomes owner of the facility.  County Executive Tom Santulli says that Barrett is actively pursuing a replacement. Though it’s unknown if a new team will be secured before the hockey season gets underway.  In the meantime, officials say event bookings such as the Professional Bull Riders and WWE have helped the IDA break even on the arena.

A New York State boater safety course will be hosted by the Finger Lakes Boating Museum in Hammondsport on June 10th from 10 a.m. to 6 p.m.  Students must be at least 10 years or older to attend.  Cost is $30 for members and $35 for nonmembers.  Those 18 and older are required to pay a $10 fee to NYS.  For more information or to register call 569-2222.  Registration is required.