Tuesday residents took to the polls in their school districts to weigh in on budgets, propositions, and board of education seats.  Most area schools saw approval across the board, and many open board seats were running unopposed.

Board of Education Election - Jennifer Swarts

Board of Education Election - Kevin Devine

Board of Education Election - JoAnn Miller

Board of Education Election - Richard Drain

Board of Education Election - Brian Robbins

No serious injuries have been reported in an accident Tuesday afternoon where a vehicle ended up in a pond on the ninth hole of the golf course at the Bath Country Club.  The incident occurred around 4 p.m. when a car ran through a nearby intersection, went up and over the train tracks, and crashed into the pond.  Witnesses say a woman and three dogs were in the car at the time.  There’s word at this time as to the cause of the accident. 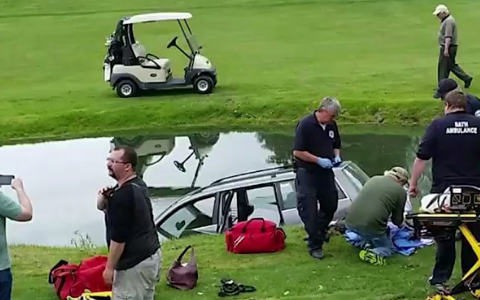 A Wayland man has been arrested for allegedly providing alcohol to minors.  53-year-old Calvin Buck was charged with five counts of unlawfully dealing with a child in the 1st degree.  He was issued an appearance ticket for the Village of Wayland court.

Tuesday, the Village of Canisteo swore in its first Police Chief in over 30 years.  Family and friends of the new chief, as well as village and town officials, and many law enforcement personnel from across the county, including Sheriff Jim Allard, gathered at the Nicklebrew restaurant for the ceremony that welcomed Chief Kyle Amidon to his new position.  At 29-years-old, Amidon is one of the youngest, if not the youngest, police chief in the state.  He previously served with the Hornell City Police, and was the Officer in Charge of the Canisteo Village Police Department.  He was promoted to Sergeant in 2015.

Governor Andrew Cuomo has new proposed legislation that he says would protect drivers without college degrees or high paying jobs from “unfairly discriminatory” auto insurance rates.  The proposal comes after an investigation by the Department of Financial Services found that some insurers use the criteria when determining a customer’s rate – meaning people with low paying jobs could have to pay a higher rate, while those with degrees and high paying jobs pay less.  The new legislation would make it so an insurer could only use the criteria if they can prove it does not create rates that are discriminatory.  Public commenting on the proposal opens today.

Walk and Roll at the Bath VA Today:

Today the Bath V.A. Medical Center is holding its annual VA2K Walk and Roll to benefit homeless Veterans and promote health and wellness.  Participants can walk anytime from 10:30 a.m. to 1 p.m. around the parade ground on the V.A. campus.  There’s no registration fee, but participants are encouraged to donate in support of homeless veterans.  Donations may include paper products and cleaning supplies.