Lawmakers, researchers, and farmers gathered at Cornell University Tuesday for the first ever Industrial Hemp summit to discuss the benefits and challenges of industrial hemp farming in New York State.  Lieutenant Governor Kathy Hochul was on hand to announce the awarding of six more pilot program permits to private institutions – four were awarded last year.  The Hemp Industries Association estimated in 2013 that the U.S. generated nearly $600 million in hemp products sold.  That number is expected to rise to nearly $700 million this year.  One supporter of hemp farming is Senator Tom O’Mara, who called it a great economic opportunity for the area.

Reed Stands with Meals on Wheels:

As President Donald Trump’s proposed 2018 budget stands poised to slash funding for federally funded programs such as Meals on Wheels, local lawmaker Tom Reed is voicing his opposition to the plan.  Reed attended the Open House Tuesday for the Meals on Wheels of Chemung County at their new facility and he told organization leaders that he’s committed on the federal level to fight for funding.  Reed called the program one of his budget priorities.

There will soon be new buses with more user-friendly ramps on the roads of Steuben County.  The three new buses are part of the efforts county officials are making to provide more effective and efficient transportation across the county.  A study is also being performed on the challenges of transporting people in Steuben and ways are being planned to meet them.  An initial report found that public transit with centers in Corning, Hornell, and Bath only cover 427.5 miles out of the 3,147 miles in the county road system.  The full study is due at the end of the year. 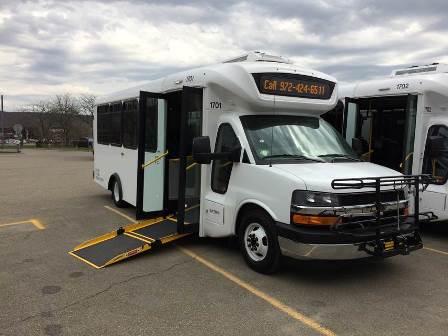 Be Prepared for Sweeping on I-86 Next Week:

The New York State Department of Transportation has announced that highway sweeping will be performed on I-86 in the Painted Post/Corning area between exits 43 and 46.  The work will start on the morning of Monday, April 24th and will take place daily until completion, which is anticipated for Thursday, May 4th.  The sweeping will be done as night work, with crews on the road between the hours of 7:00 PM and 3:30 AM.  Drivers are advised to be alert for a slow-moving sweeper and associated vehicles on I-86, and to watch for lane reductions.

Bon-Ton Expanding at the Arnot Mall:

The former Macy’s space at the Arnot Mall will soon have a new tenant, one that’s actually been at the mall since 1995.  Officials with Bon-Ton have announced that the store will be moving into the former Macy’s location, increasing their space by more than 40,000 square feet.  Renovations are expected to begin next month.  The current store will remain open until the new one is ready in September.

Round 1 of Main Street Contest Almost Over:

Round One of the “America’s Main Streets” competition is almost over, and Corning’s Gaffer District is hoping to move on to the quarterfinals, but it can’t do so without votes.  To vote for the Gaffer District visit https://www.mainstreetcontest.com/profile.php?id=244.  You can vote once a day until the end of the round, which is Monday.  The Gaffer District is one of 200 Main Streets vying for a $25,000 grand prize that will help revitalization initiatives and promote buying local.

H-Port Board of Ed. Meeting:

The Hammondsport Board of Education will hold its regular meeting tonight at 6 p.m. in the high school library.