The former Corning-Painted Post Middle School teacher charged in 2016 with rape, plead guilty Tuesday to endangering the welfare of a child, and she was sentenced to three-years probation.   Police say 44-year-old Kelly Conway had an ongoing sexual relationship with a student under the age of 17.  The incidents did not occur at the middle school.  The terms of Conway’s plea will force her to stay away from schools, stay off social media, and she will forfeit her teaching license.  She will also pay a surcharge of $205, and a $1,000 charge for the offense.

E-C Airport Gets Go Ahead for Construction Bids:

The Elmira-Corning Regional Airport has gotten the go head to begin the process of expansion.  The Chemung County Legislature voted Monday to authorize ads for three bid packages.  Phase one will redesign the terminal.  Another relocates the baggage claim and the eastern terminal will be replaced with a new structure.  The project will cost $58 million.  $40 million is coming from the state.

New York Attorney General Eric Schneiderman has announced that the state is ready to invest $20 million to help fight the problem of vacant and abandoned properties.  The new program, Cities for Responsible Investment and Strategic Enforcement (or Cities RISE) will provide governments with technology to map and analyze property data from different sources, and help officials develop strategies for housing improvement, code enforcement, and blight elimination.  Grantees receive a two-year subscription to a data platform including code enforcement records, tax liens, fire, and police data.  Applications are due May 5th by 5 p.m.; award notifications are expected in late May.

New York State Police report the arrest of 19-year-old Ian Carter of Springwater.  He was charged with harassment in the second degree.  He was issued an appearance ticket and is expected to return to Hornellsville Town Court at a later date for arraignment.

You might have seen the images going around on the internet: Niagara Falls and the International Peace Bridge were lit purple Tuesday night, but why?  It was in celebration of the New York State Police, who reached a major milestone Tuesday, 100 years of service.  It was on April 11th 1917 that the state Legislature passed a bill establishing the State Police as a full-service agency. 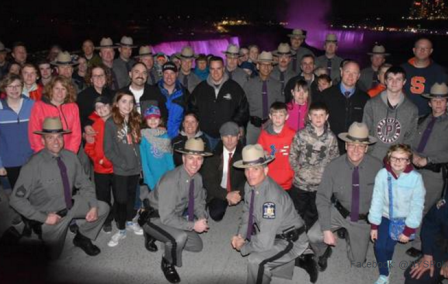 The Town of Hornby will be doing its part to make the planet a greener place later this month.  On Earth Day, April 22nd, the town will again sponsor its annual roadside cleanup event.  It will be from 10 a.m. to 1 p.m.  Participants will meet at the Town Barns.  Gloves and bags will be provided.

As the temperature continues to steadily climb, you should expect the price of gasoline to follow suit.  The Energy Information Administration said on Tuesday that retail gas will cost an average of $2.46 a gallon from April through September, up from $2.23 a gallon last summer.  Diesel is also expected to cost more, climbing to an average of $2.70 a gallon.