Canisteo Brothers Arrested for Menacing with a Gun:

Two Canisteo brothers have been arrested following an argument that escalated to include an attempted murder charge.  According to the State Police in Bath, the victim went to the home of 53-year-old Gavin Bartlett and 58-year-old George Chipman on April 2nd to collect money.  There was an argument that escalated, and Bartlett allegedly brandished an unregistered pistol and Chipman reportedly pointed the weapon at the victim and pulled the trigger.  It was unloaded.  During their investigation, police say they discovered a second unregistered pistol.  Bartlett is facing charges of menacing and criminal possession of a weapon.  Chipman is facing an attempted second degree murder charge.  Both men were sent to the Steuben County Jail with bail set at $1,000 and $5,000 respectively.

Corning Police officers responding to a family dispute got a bit more than they expected Wednesday.  When they arrived at the scene, in the 100 block of West Second Street, they reportedly discovered a meth lab.  The New York State Police Community Emergency Response Team was called out to the house and one person was arrested.  25-year-old Kyle Force has been charged with unlawful manufacture of methamphetamine and he was sent to the Steuben County Jail on $5,000 cash bail.

The Elmira man convicted of killing Kelley Stage Clayton will be serving his life sentence at the maximum security Clinton Correctional Facility; the prison from which two inmates infamously escaped in 2015, leading to a nearly three-week manhunt.  Beard was convicted in November of First and Second degree murder and he was sentenced in February, just days after Kelley’s husband, Thomas Clayton, was also convicted on First and Second degree murder charges.

On Wednesday the New York State Department of Transportation held a public meeting to discuss some major changes to Kanona.  The biggest change will be to the “T” intersection where Route 415 and 53 meet.  According to Design Engineer and Project Manager Michael Griffin, “there have been a higher than expected amount of accidents over the past several years” so the plan is to build a roundabout that will maintain traffic, while slowing it down.  There was also talk about the bridge just down the road which is in need of repairs.  Bath Town Supervisor Ron Smith said that foot traffic is expected to be maintained during construction on the bridge.  Work is set to get underway in 2019.

The 2017 Pinwheels and Promises campaign opened Wednesday.  In its sixth year, the program features pinwheels made by local youth programs, libraries, churches, and other organizations, and encourages everyone to help prevent child abuse in Steuben County.  It runs through April, which is National Child Abuse Prevention month. 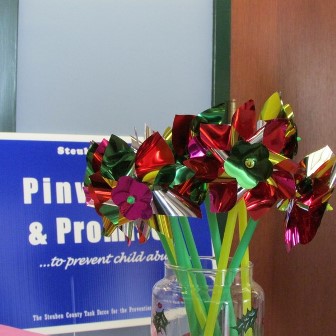 The deadline for reservations for the 2017 Steuben County Hall of Fame banquet is April 14th.  The banquet will take place at noon on April 22nd at the First Presbyterian Church in Bath.  To make a reservation, call (607) 664-2199.

Centenary United Methodist Church in Bath.  Reservations are open until April 19th.  The free event will feature the presentation “Rest for the Weary” by Richard Russell, executive director of Faith in Action Steuben County.  The workshop will also include a panel of community staff representing Chronic Disease Self-Management, Tai Chi for Arthritis and more.  A light breakfast and lunch will be served.  For more information and to make reservations, call the county Office for the Aging.