A Rochester man was arrested Thursday afternoon at a local business on State Route 54 in Bath.  The arrest follows an investigation into reports of a suspicious person around the business calling himself a Federal Law Enforcement Officer.  62-year-old Dr. Richard Hoyer has been charged with criminal impersonation.  According to the Steuben County Sheriff’s Office, Hoyer was found to be in possession of handcuffs, pepper spray, a police badge, ballistic body armor, and other police paraphernalia, some of which are illegal to be possessed by a civilian.  He was released on his own recognizance.  An order of protection was also issued for an employee of the business, ordering Hoyer to stay away from her and the business at all times.  More charges are pending.

A Bath woman is facing 16 charges following a police chase Wednesday afternoon that ended on Sand Pit Road in the Town of Bath. State police arrested 33-year-old Jamie Brewer. She was charged with felony driving while intoxicated and misdemeanor counts of reckless driving, fleeing police and aggravated unlicensed operation. Troopers also issued Brewer a fist full of traffic tickets to include failure to obey police and speeding in a school zone.

The New York State Police of Bath are investigating the theft of an all-terrain vehicle from a residence on East Lamoka Avenue in the Village of Savona.  The incident is believed to be occurred in the early morning hours on Wednesday.  The ATV is a white 2008 Polaris Outlaw, equipped with red and black decals.  It had been parked near the roadway, just past the elementary school, and was being offered for sale.  Police believe the subject(s) may have loaded the ATV into a pickup truck and then fled.  Anyone with information is asked to contact the State Police. 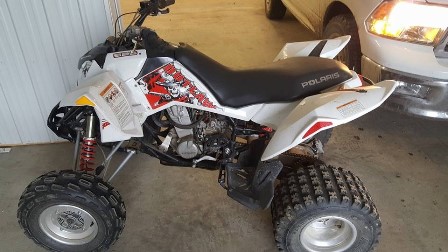 New York State one of several states that are planning to join legal challenges to President Donald Trump’s revised immigration ban.  The legislation bars the admission of refugees and some travelers from a group of six Muslim-majority countries.  The order is set to take effect on March 16th.  It replaces a more sweeping ban that was issued on January 27th that was struck down in court.  Hawaii announced plans on Wednesday to challenge the ban.  The Attorney Generals of Washington, Minnesota, and Oregon have said they will also challenge the ban.

Fate of First Arena to be Announced Today:

Chemung County officials have announced that the fate of the First Arena will, once and for all, be announced this afternoon.  The prospective owner of the facility and the Elmira Jackals was expected to submit documentation to the team’s league on Thursday.  County Executive Tom Santulli said previously that the determination by the ECHL would influence the deal to sell the facility.  The prospective buyer is unknown, but county leaders say he is local, has hockey connections, and is willing to invest $3.5 million into renovations.

Public Meeting with the DEC on Corning Soil Remediation:

The public will soon get details on the New York State Department of Environmental Conservation’s plans for the soil remediation in Corning.  A public meeting will be held on March 22nd with the DEC and the Department of Health at the Radisson Hotel beginning at 6:30 p.m.  The agencies will outline proposed plans for dealing with contaminated soil in the area.  Also, from 3 to 5 p.m. agency staff and Corning Incorporated will be available to answer questions concerning the study area.  Remediation could begin this summer.  Public comments are being accepted until April 10th.  For more information about the meeting and the proposals, click https://www.dec.ny.gov/data/der/factsheet/851046pddou1235.pdf

Wilkins RV has announced that it will be expanding into two former Ballantyne RV locations, in Victor and Cicero, following its completed purchase of the company.  Both of the locations are pending license approval from the state.  Opening is planned for as soon as they are obtained.  Wilkins RV was founded in Hornell in 1936 as auto detail shop.  In 2006, it moved to a 50,000 square-foot dealership in Bath, and expanded its second location in Churchville in 2011.