Four more witnesses took the stand Tuesday at the Steuben County Courthouse in the Thomas Clayton murder trial.  Among them was Steuben County Sheriff Jim Allard, who was undersheriff at the time of Kelley Clayton’s murder.  Allard testified to statements made by the responding deputy at the scene of the crime.  He said the deputy told him the scene looked like a domestic incident gone wrong, and that it looked like Thomas Clayton was covering something up.  Several investigators with the New York State Police also testified on Tuesday, including one who stated that the tires on the red truck Clayton allegedly provided to Michael Beard did not match the ones found at the crime scene.  Court will resume today at 9:30 a.m.

New York State Police in Horseheads executed a search warrant Tuesday morning for a Town of Big Flats man on allegations of child pornography.  67-year-old Ralph Beaton is facing felony charges of promoting a sexual performance by a child, and possession of a sexual performance by a child.  He was sent to the Chemung County Jail in lieu of $5,000 cash bail.  Additional charges may be filed after additional examination of recovered evidence.

Puppies Recovering after I-86 Accident:

Puppies on their way to a pet store were rescued and treated by the Steuben County SPCA Tuesday after the vehicle they were in lost control on I-86 near Avoca.  State Police in Bath say the driver, Emily Woodrum of Missouri, was allegedly driving at an unsafe speed when she lost control and went into the ditch.  Of the 100 puppies, 5 suffered minor injuries.

Steuben County legislators approved Monday a plan to cover as much as 80 percent of the felony cases handled by assignments, thereby reducing county costs.  The Legislature approved increasing the part-time conflict defender position to full time, reducing the need to hire outside attorneys in the event of a conflict of interest for the Public Defender’s office.  The salary increase, from the current $37,500 to $75,000, is expected to be paid largely through a state grant.

Corning Inc. had a strong fourth quarter and a good 2016, according to the latest financial reports released by the company.  The fourth quarter was their best out of the year, with each quarter building upon the previous.  Over the year, the company saw a six percent growth in sales, 24 percent earnings growth, and 47 percent earnings per share growth.  Vice President of Corporate Communications Dan Collins said that 2017 looks to be a strong year as well, with an expectation of improved net income, improved sales, and improved earnings per share throughout the year.

Governor Andrew Cuomo’s ambitious proposal for free tuition for eligible students in New York State faced its first hearing in Albany Tuesday and the debate went on for more than six hours.  State legislators discussed who would be eligible, how much it would cost taxpayers, and if a tuition-free policy is the best way to make college more affordable.  The proposal would make New York the first state to make tuition free at both community colleges and four-year schools.  Tennessee and Oregon have tuition-free two-year community college programs, and Rhode Island is currently considering a similar program to New York’s.  Some of the challenges to the proposal include the fact that part-time students are excluded, that the free-tuition wouldn’t include room and broad, or fees or books, and that it’s still unclear how much exactly it would cost the state.

The Steuben County Legislature recently accepted, with thanks, work on the county Fire Investigation Bus volunteered by Kris Goodrich, owner of Goodrich Auto Works in Bath.  The donation included labor for lettering, preparing and painting the bus.  The work was valued at $9,900. 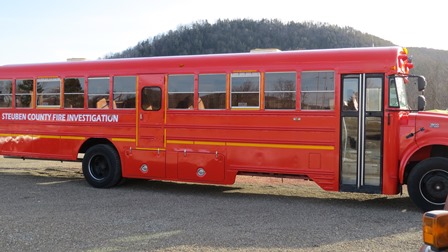