Just before three a.m. Monday, the Bath Volunteer Fire Department was dispatched on a report of a tractor trailer tanker rolled over in the median east of Bath exit 39 on I-86.  The driver of the truck got out on his own and signed off medical treatment with the Bath Volunteer Ambulance Corps.  The truck had been hauling lubricants, but was empty at the time. 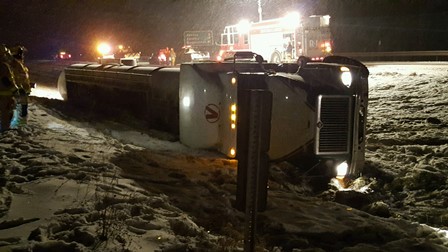 The investigation into a bomb threat made against the Steuben ARC building has led to an arrest.  52-year-old Brian Akins of Bath has been charged with falsely reporting an incident, a misdemeanor, for allegedly threatening to blow up the building to another person.  He was issued appearance tickets and will return to Bath Town Court at a later date.

An Addison man has been arrested following investigation by Steuben County Deputies into an explosion or gunshot from a residence on Niles Cross Road in Addison.  Deputies reportedly spoke with 24-year-old Brett Cervoni while investigating and discovered that he had a bench warrant out of the City of Hornell for failing to appear on charges of criminal contempt.  He was arrested and turned over to Hornell police.

A resolution was at last created and agreed upon Monday night for a one year fire and ambulance services contract between the village and town of Canisteo.  The village had originally been seeking a three year contract, but the town disagreed.  The town was able to barter the price down from $105,000 to $95,000 for the year.

Teen Drug Use Down:

A new survey from the National Institute of Drug Abuse has found that fewer teenagers are using and abusing drugs.  That includes a decline in alcohol, cigarettes, opioid painkillers, and marijuana, except among high schoolers where pot use remains steady.  The data was gathered from more than 45,000 students in 372 public and private schools.

“Primitive This and That,” a store at the Arnot Mall, reopened Monday after being seized and shut down last week for allegedly not paying sales tax.  According to the state Department of State records, the store owed at least $19,000 in taxes.  The owners say the issues stemmed from a small clerical error made from an outside accounting firm, and they have since fired that company and have hired a local firm with a quality reputation.  In a statement they said they want the public to know they never knowingly would try to evade payment of any sort of taxes.

Yankee Candle has announced the recall of about 31,000 of its candles.  Specifically the luminous collection fragrance candles which come in square glass jars.  The jars can reportedly crack while lit, posing a laceration hazard.  The company says it has received 16 complaints of the jars cracking, but no injuries have been reported.  The candles were sold exclusively at Yankee Candle stores and on yankeecandle.com between September and November.

The Saga of the Steuben Co. Legislature’s Fruitcake:

The fate of a piece of local, little known, history will be decided on December 19th.  That morning, Steuben County Public Health Director Darlene Smith will select a recipient of the Steuben County Legislature’s fruitcake.  The humble holiday cake has had a storied life among Steuben County’s elected and civil officials.  It was first purchased in 1991 by then-county Administrator Mark Alger, who then passed it on at the office Christmas party.  It has since passed hands 19 times – the same cake, in the original wrapping, reportedly encased in layers of cling wrap and aluminum foil and stored in the recipient’s freezer.  As for who will receive it next, Smith says she’s “all set” for next week.